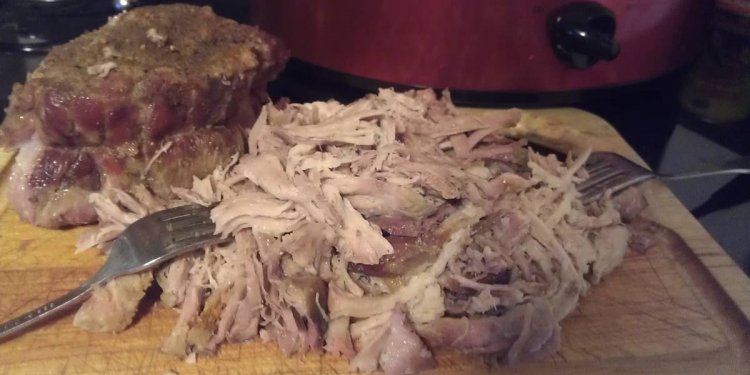 Maybe you tune into the Super Bowl for the commercials. Maybe you watch for the halftime show. Perhaps you want to see who's singing the National Anthem. (Or maybe you actually want to watch football?)

For us, though, the Super Bowl is really about the food.

And this year, the menu is all about barbecue.

When we saw this recipe for Indoor Pulled Pork in the January issue of Cook's Illustrated, we instantly knew we had to make it. In our minds, this became something of a Super Bowl in itself, but it's about something much bigger than the Colts vs. the Saints.

That Ultimate Cheater Pork has some pretty impressive stats. It's delicious, and the meat is amazingly tender and juicy. And because it uses a slow cooker, it's super easy.

But there's one drawback to the slow cooker pork. There's no smoky char, none of the delicious crunchy crust you'd get from real, honest-to-goodness pit barbecue. The meat's good, no question. It just sort of takes on the flavor of whatever sweet sauce you slather on it. There's no bite.

That's where this Indoor Pulled Pork comes in. By roasting it in the oven - uncovered for part of the time - the recipe promises pork with an actual crackly skin.

So can you really make pit-roasted smokehouse barbecue in your oven?

Heaven on a bun

Absolutely! An unqualified yes. This pulled pork tastes like it came from the best, divey-est Memphis BBQ shack. The pork's got a real smokiness to it. (Actually, both of these BBQ recipes include liquid smoke. But the smoky flavor didn't really come through as strongly in the Cheater BBQ Pork.) The meat is fork-tender with an awesomely crunchy crust.

Because of the brining and the removing of the foil and the pouring off of the liquid, this recipe requires more active attention than the Cheater BBQ. But we think it's worth it for the truly authentic smokehouse effect you get.

But a great barbecue needs a killer sauce. We actually made all three of the sauces that the magazine suggests: a Sweet and Tangy Barbecue Sauce, a Lexington Vinegar Barbecue Sauce and a South Carolina Mustard Barbecue Sauce.

When we've made barbecue sauces in the past, honest to goodness cooking was involved, simmering ingredients on a stovetop. Here, ingredients are whisked together with defatted cooking liquid from the pork, and that's it. No additional cooking required. Our 5 pound pork butt produced more than enough liquid to make all three sauces.