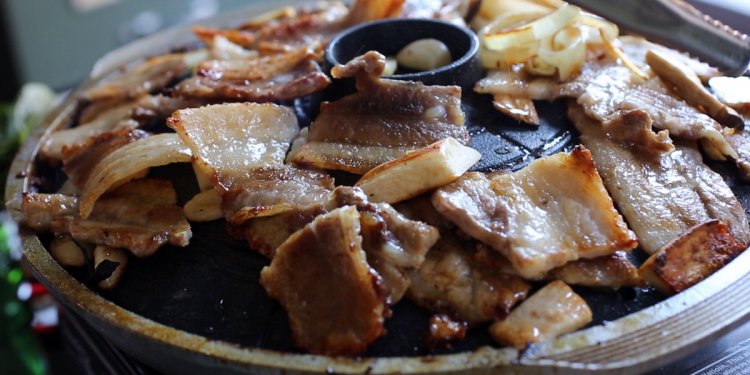 If you don’t know jackfruit, you will soon. It’s a healthy and sustainable vegan meat replacement and it’s set to be one of the biggest food trends of 2017. Best of all, it's the key to making an insanely delicious BBQ pulled 'pork' sandwich that you won't believe is vegan.

A relative of figs and breadfruit, jackfruit grows in tropical areas of Southeast Asia, Brazil and Africa. While it is a fruit, its consistency is similar to that of chicken or pork. It has a fairly neutral taste when young, so it takes on the flavor of whatever sauce or seasoning you pair it with. It has a stringy consistency that works especially well with tangy BBQ sauce to make a vegan BBQ pulled 'pork' sandwich. True story: I served my BBQ pulled jackfruit sandwich recipe to my meat-loving 5-year-old son and he gobbled it up without even asking what kind of meat it was.

Unlike animal sources of protein, jackfruit contains no saturated fat or cholesterol, is light on sodium, and is also low in calories, with just 20 per 2.65-ounce serving. Additionally, jackfruit contains 3g of fiber per serving, as well as 110mg of potassium, both heart-healthy nutrients that many of us are not getting enough of. Plus, it’s sustainably sourced, something that today’s consumers care about and are willing to pay for.

Why jackfruit is trendy

It looks like 2017 may be the “Year of the Vegan.” Products that I couldn’t have imagined a few years ago, like vegan beef jerky and seitan bacon, are hugely popular and are showing up in the grocery carts of committed vegans and meat eaters alike thanks to their health profile. In fact, sales of meat alternatives rose from $69 million in 2011 to $109 million in 2015.

As to the question of whether jackfruit is an amazing protein source, the answer is “meh.” The seeds of the jackfruit are rich in protein, but the fruit itself is not. A 2.65- ounce serving has just 1g of protein, compared with 21g in the same amount of chicken breast. You can buy jackfruit seed flour to bake with, but it’s still quite hard to find.

How to prepare jackfruit: Young vs. ripe

The first thing to know about jackfruit is that when it’s “young, ” “green” or unripe, it has an entirely different consistency and usage than when it’s ripe. Ripe jackfruit is eaten like any fresh fruit — the only difference is that it’s an extremely large fruit. An average jackfruit weighs between 30 and 50 pounds. Once you cut through the thick, green coral reef-like skin, you’ll find a creamy white interior filled with fibrous fruit and large pits.

The flavor of ripe jackfruit is sweet and it’s typically eaten raw on its own or as part of a dessert. My friend Loc is from Vietnam and he buys a 2 lbs section of it for in Manhattan’s Chinatown. He brings it home, chills it in the fridge, and then cuts out the seeds with a sharp paring knife (this takes some effort) and eats it in large quarters. It’s still easiest to find whole jackfruit in Asian markets, but they’re making their way into mainstream grocery stores. And yes, you can order them on Amazon Fresh.

Young, unripe jackfruit can be found canned and also in pouches in the refrigerated section of the grocery store. This is the type that is gaining so much attention as a meat alternative. You’ll start seeing it on menus this year in tacos, burritos, curries, bowls and stir-fries.

And what about buying a whole green jackfruit? If you can even find one, it will be filled with a sticky white resin that stains whatever it gets on. But if you’re a total DIYer — go for it! Just know that you’ve been warned.

What to do with it

Young jackfruit is generally packed with some amount of water, and sometimes also salt, so give it a rinse with cold water and let it drain in a colander before using it in recipes. Then you can literally do anything with it! It works especially well with bold and spicy flavors. Add it to chilis and stews, or sauté it with onions and peppers and throw it in a pita with some za’atar. Rub it with a Mexican spice blend, sear it in a pan and then wrap it up with brown rice and avocado for a filling burrito.