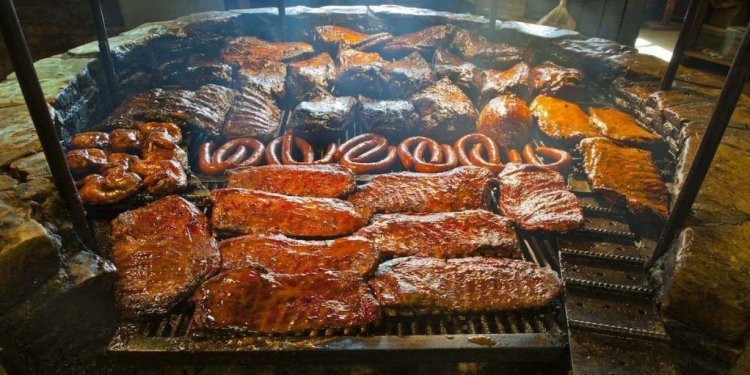 In June 2013, when we published our list of the fifty best barbecue joints in the state, we declared that “we are now in the golden age of Texas barbecue.” Two and a half years later, this era continues, despite claims by heretics who say the state has achieved “peak barbecue.” It’s hard to deny barbecue’s saturation in our state—more than two thousand joints are in operation today, one for roughly every 12, 000 Texans—but it remains notoriously difficult to master the craft. If smoking the perfect brisket is the cuisine’s equivalent of summiting Everest, then Aaron Franklin, pitmaster of Austin’s Franklin Barbecue, is Edmund Hillary. In 2015 he became the first pitmaster to win a James Beard Award, the food industry’s Oscar, lending barbecue a dose of much-deserved gravitas. This acknowledgment of barbecue’s influence also ignited a desire in new and old pitmasters alike to reach greater heights. The result is an abundance of succulent smoked meats—and 25 new and improved joints in Texas worth visiting. But you’ll have to wait until 2017 to find out if one of them will reach the pinnacle of their profession: the number one spot on our next top fifty list.

The Big Country, home to the renowned Perini Ranch Steakhouse, in Buffalo Gap, is known as a mecca for steak lovers. Paradoxically, there’s not much good barbecue around these parts, though Matt and Kelly Proctor, founders of Stillwater Barbeque, are aiming to right that wrong. They opened their food trailer in 2013 and started cranking out exceptionally good smoked meats (they went brick-and-mortar in April 2014). The pulled pork shines, but the brisket and spare ribs hold their own too. Meat is clearly on the brain here: few dishes escape the kitchen without at least a smidgen of it, most notably the mac and cheese bolstered with brisket, a “side” that could be a meal by itself. 3365 S. 14th, 325-518-5071. Open Tue & Wed 11–3, Thur & Fri 11–3 and 5–8, Sat 11–3.

As the adage goes, timing is everything. Just as Texas Monthly was wrapping up scouting for 2013’s top fifty list, Freedmen’s opened. Despite a solid debut, the place had yet to find its footing and just missed the final cut. Since then, pitmaster Evan LeRoy has more than proved his barbecue bona fides. In particular, his brisket—succulent, fatty, and surrounded by a delightfully crunchy bark—earned him a spot as the official newcomer to the 2015 TMBBQ Festival. But Freedmen’s is no one-hit wonder. LeRoy’s creative sausage selection keeps the menu fresh, as does his propensity to include smoked ingredients—jalape­ños, beets, potatoes, bananas—in his appetizers, sides, and desserts. 2402 San Gabriel, 512-220-0953. Open Tue & Wed 11–10, Thur–Sat 11–midnight, Sun 11–10.

When Bill and Amelis Kerlin moved from Arizona to Texas, the backyard pitmasters didn’t have much experience with brisket. But soon, the husband-and-wife duo began experimenting with the cut, entering—and winning—some barbecue competitions. The awards were affirmation enough to open a small trailer, and within a few months, the Kerlins were being mentioned in the same breath as the heavy hitters. Bill, who mans the pits, is a fast study, and his skills with a smoker deserve the accolades. But it’s Amelis who has stolen the show. She took another beloved Central Texas staple, kolaches, and began stuffing them with smoked meats, proving that the best ideas always seem to be the most obvious. 1700 E. Cesar Chavez, 512-412-5588. Open Fri–Sun 11 till the meat runs out.

Austin’s DIY, made-from-scratch, ultra-locavore reputation may have haters grumbling that the city has become a bit precious. But then someone like Tom Micklethwait comes along and proves that painstaking attention to detail yields incredible results. It’s been a strange journey to barbecue greatness for Micklethwait, who, when he opened his small trailer in 2012, didn’t even offer brisket on the regular menu—sacrilege in Central Texas. But he mastered the meat, and now he smokes some of the city’s best. That same careful consideration is applied to his innovative sausage creations and house-made pickles and white bread. 1309 Rosewood Ave, 512-791-5961. Open Tue–Sat 11–6, Sun 11–3.

Before Terry Black’s even opened, a cloud hung over the restaurant. First, there was the public spat about the name: When Michael and Mark Black announced they would be opening Black’s Barbecue Austin, their uncle, Kent Black—pitmaster of the original Black’s Barbecue, in Lockhart—filed a cease-and-desist order. The brothers chose instead to name the joint after their father, Terry. Then, once they finally started their operation, neighbors complained about the actual cloud hanging over the restaurant and requested a new city ordinance to limit smoke emissions. Despite those bumps, the barbecue is superb. The house-made beef sausage is juicy and peppery, and the turkey is a surprise stunner. 1003 Barton Springs Rd, 512-394-5899. Open daily 11–9.

When barbecue and Tex-Mex come together, they produce the most harmonious marriage of flavor. And when it comes to uniting these two cuisines, there is no better matchmaker than Miguel Vidal, pitmaster and co-founder of Valentina’s. The equation is simple: mesquite-smoked brisket + made-to-order from-scratch tortillas + homemade salsa and guacamole = a blissful bite. Should anyone know of any reason that this couple should not be joined in holy matrimony, speak now or forever hold your peace—unless your mouth is too full to object. 7612 Brodie Ln, 512-221-4248. Open Mon 8–9, Tue–Sun 8–10.