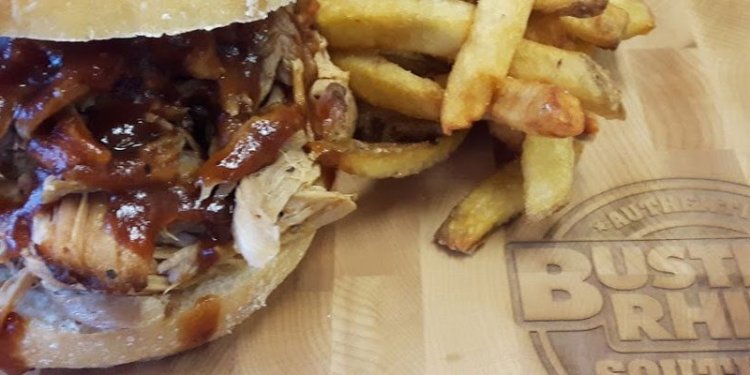 Barbecue, barbeque, bar-b-q, BBQ: there are almost as many spellings as there are kinds of barbecue, as if the proliferation of words could express the mastering tastes and aromas of the food, all the experiences that can fill the mouth, the place where also words begin. Today, barbecue is more popular than ever and can be found by a hungry Southerner in almost any American city, but barbecue will always be Southern because, as an American cuisine, that’s where it began and because that’s where it continues to evolve most interestingly. Though the word barbecue devolves from Taino, a pre-Columbian Caribbean language, the native method described by the word — the slow drying of sliced, spiced meat, over a low, smoky fire — seems to have been fairly widespread in the eastern Caribbean at the time of European contact, being practiced in what would become Brazil as well as in what would become Virginia. But it was in Virginia and in the Carolinas that barbecue as we know it would begin to evolve. In Virginia, British colonists observed the Native American method of drying meat on a grill of green sticks over a smoking fire and soon married this method to their own interest in spit-cooking hogs and other small animals. The British introduced their own native practices, including basting — either with butter or with vinegar — to keep the meat from drying while cooking. Slaves of African descent, imported from the Caribbean, brought a taste (developed in the islands) for New-World peppers, especially red pepper. Along the Atlantic seaboard, then, when the vinegar and butter combined with the spices and peppers, barbecue sauce arrived on the Southerner’s and the Briton’s favorite hog. Even today in eastern North Carolina, you can find whole-hog barbecue, lightly seasoned with vinegar and black and red peppers, colonial style. In South Carolina, in the Broad River Valley, German and French immigrants brought their taste and recipes for mustard, which helped repel malarial mosquitoes, and these mustards found their way into that colonial food, barbecue, and remained there, through the Revolutionary War, the Civil War, and two World Wars, to be found even today in the same Broad River Valley. To the west, in the Piedmont area of North Carolina, probably toward the end of the 19th- or the beginning of the 20th-Century, barbecue cooks began using just the shoulder of the hog when barbecuing, an innovation perhaps encouraged by the growth of the meat curing and packing industries. In this same area, populated largely by Germans, German-style coleslaw, both sweet and spicy, dressed the pork, and the tomato, only recently determined edible, sweetened the fare. From these come all the rest, or almost all the rest. The whole-hog style that developed along the Atlantic seaboard has drifted into western Tennessee, and the Piedmont style, with some variations, can be uncovered in northeast Alabama and, with American-style coleslaw, in Memphis. Mustard-based barbecue, though still centered in South Carolina, can be found as well in Georgia and eastern Alabama, where one can also find an orange sauce that combines mustard and tomato-based sauces, as if to say, Does one really have to choose? Of course, Kentucky has its barbecue mutton and its burgoo, which resembles Georgia’s own Brunswick Stew, a traditional barbecue accompaniment. In Texas, German settlers in a cattle-friendly land developed barbecue sausage and the holy brisket, where today Mexican influence directs the emergence of barbacoa and other delicacies. And in that far edge of the South, Kansas City, half Missouri and half Kansas, it has all come together, as it has come together now in so many cities across the South and across the United States. But there are still new barbecue plates being dreamed up by the hungry and the resourceful. How about north Alabama’s white-sauce chicken, northwest Mississippi’s taste for goat, or the barbecued gator that turns up in Louisiana and Florida? Whatever it is, it is slow-cooked. If it’s done right, it’s smoked. Honestly, it could be anything. But, whatever it is, it better be damn good. – Jake Adam York Jake was a poet, bbq-lover, and dear friend of the SFA. We lost Jake in 2012, but his work lives on.