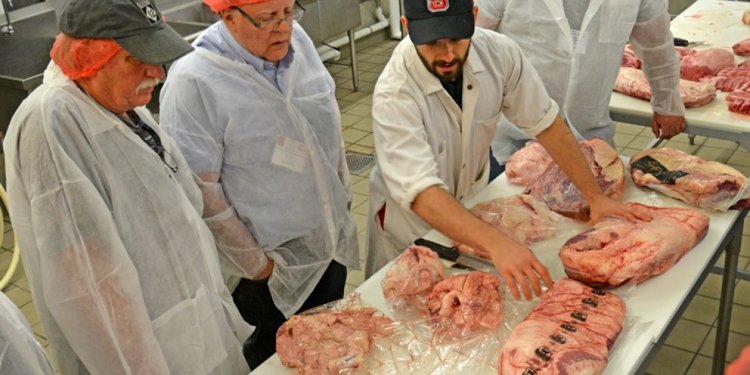 For the most part, cuts of meat to barbecue vary widely from region to region. Traditionally, beef and pork cuts are most common, but poultry (chicken and turkey) is widely prepared, and lamb and goat are regional favorites.

Knowing the cuts of meat is important in understanding how best to cook products, how many servings you will get from them, their costs, and their versatility. On top of knowing the cuts, there are USDA grades, private brands, grass-fed, natural, organic, heritage, and other different marketing terms that add a level of complexity to selection of the cuts to use in barbecuing.

Understanding all of the meat options for barbecuing is the first and foremost area that is to be learned by the barbecue enthusiast.

Briskets – Packer-trimmed briskets typically come from the packer pre-vacuum packaged. As the name indicates, these were trimmed as they were “fabricated” or removed from a beef carcass. That usually indicates the brisket will still be covered with a thicker fat cover, which many barbecue enthusiasts prefer for long-time cooking. A packer-trimmed brisket is usually the entire beef brisket versus a brisket point or brisket flat, which may be found at a local retail store or meat market. Brisket points are the anterior (forward) end of the brisket and is typically fatter – both covering the brisket as well as between the muscle fibers. Brisket flats are considerably leaner, both in fat covering and especially within the muscle itself. Briskets tend to have high levels of connective tissue, which require longer cooking times at low temperatures. Yields of cooked, trimmed lean are approximately 50% of the raw weight of the brisket.

Clods – Clod is not the most appealing name for a meat cut, but a beef clod can be an excellent choice to barbecue for a large number of edible portions. The beef shoulder clod is fabricated from a beef chuck, or the shoulder area of a carcass. It includes a number of muscles that range from extremely tender to somewhat tough in terms of overall tenderness. Overall, the muscles are inheritably more tender than the muscles in a brisket, so slow, low temperature cooking will help minimize muscle differences. The internal temperature of the cooked clod may not need to be as high as a brisket to achieve the same or even greater tenderness of the meat, however, shoulder clods may be double or even triple the size of beef briskets, so plan cooking time accordingly.

Tri-tips – Beef tri-tips are fabricated from the lower portion of a beef sirloin and have more of a sirloin flavor. Although not heavily used for barbecue applications in Texas, it is for many areas of the western United States the standard “meat of choice” for barbecuing and even grilling. Beef tri-tips include only one muscle – the tensor fasciae latae, and muscle fibers follow the same path, allowing for easy cutting “across the grain” to aid in maximum tenderness. The cut can usually be purchased with a fat cover on one side or completely “denuded” (a term used in the meat industry to denote muscle that has had virtually all the fat removed from the outside of the cut. Internal temperature of a tri-tip can be much lower than previously mentioned cuts and still be tender. Tri-tips are much smaller (2-3 pounds) and edible portion can be close to 100% for “denuded” to approximately 70% for those with a layer of subcutaneous fat.

Back Ribs – Beef back ribs are the “upper” portion of the seven ribs (usually ribs 5-12) that are attached to a beef rib or ribeye. The rib bones are removed along with the rib intercostal muscles that are located between the ribs, so you can always distinguish beef back ribs from beef short ribs by the location of the major lean deposits on the rib. Although pork back ribs may also contain a portion of the loin that lies above, that is not the case with beef back ribs because the ribeye is much too expensive. A rack of beef back ribs will weigh 3-5 pounds based more on the length of the ribs than the amount of lean left on them. Beef back ribs contain larger amounts of connective tissue, so slow, low temperature, and even high-moisture cooking is recommended.

Beef Short Ribs – There are two areas of a beef carcass where short ribs are obtained. The first area is an extension of the previously mentioned beef back ribs. This area, commonly referred to as rib, plate or just short ribs is the most common area of the carcass used for short ribs. The portion of the rib used can be anywhere from 2 to 6 inches in length and typically includes some lean and fat overlying the rib bones. The major muscle in “meatier” short ribs (usually the three most anterior or toward the front of the rib) is the serratus ventralis muscle which tends to have a great deal of “intramuscular” fat commonly referred to as marbling. Although marbling is often equated with tenderness and flavor, short ribs should be considered as one of the cuts requiring long-time, low-heat cookery for maximum tenderness.

What to BBQ for a Party?