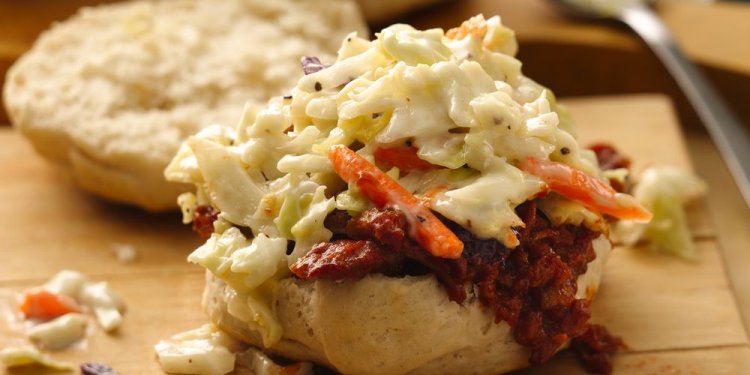 Crunchy, juicy, refreshing with bright sweet/sour/salty/savory flavors, it kicks the butt of any wimpy limpy lettuce salad. But more important, slaw is the perfect accompaniment for barbecue.

Some think that the name cole slaw comes from "caulis", the Latin word for cabbage. Cauliflower is a member of the cabbage family and is clearly derived from the Latin.

Others say the origin is Dutch where "kool" is the word for cabbage and "sla" is the word for lettuce and "salade" has evolved to mean any kind of salad. In the 1700s it is believed the Dutch popularized cabbage salad, "koolsalade", which was shortened to "koolsla". The English changed that to cole slaw or cold slaw. In the American South it became just slaw for short.

Cabbage is loaded with fiber and Vitamin C. It is a member of the Cruciferae family which also includes cauliflower, broccoli, kale, brussels sprouts, and kohlrabi (try it you'll love it). Crucifers are believed to help prevent cancer.

The two classic American styles are Creamy Cole Slaw with Mayonnaise and Sweet-Sour Slaw, and some folks choose their restaurant based on which is served. There are scores of great slaw recipes with a wide variety of ingredients, and each can be prepared with a wide variety of techniques. For example, here are two more, my recipe for Deli Slaw with Sour Cream and my Waldorf Slaw.

They are easy to make, but like anything else, there are secrets that separate everyday from holiday slaw. Here are some tips on technique to make your salad slawsome.

Dress early. Cabbage and carrots drink and leak. So make the slaw in the morning and let it chill for a few hours. The juices from the veggies will add flavor to the dressing, and the dressing will seep into the veggies. Most slaws taste better if chilled overnight. The excellent magazine, Cook's Illustrated, recommends cutting the veggies, salting them and letting the salt pull out the moisture before adding the dressing to keep the moisture from bleeding out on its own and diluting the dressing. Nice idea, but I disagree. I just make the dressing a little strong and allow for the natural juices that come out when you chill the slaw to dilute it to proper strength. One word of caution: Onion flavors get amplified as the slaw ages.

Creamy or sweet-sour. Pick one. No fighting. The choice is like creamy vs. chunky peanut butter. Or dry or wet ribs. Blood has been spilled over this issue.

Be creative. Slaws are like barbecue sauces. Learn the basics, and then you can riff away. Want a milder flavor? Try Savoy cabbage. Don't like it tart? Kill the vinegar. Like it sweet? Add more sugar. Raw onions make you belch? Leave them out. No mustard powder? The heck with it. Feeling fruity? Add raisins. Need crunch? Add nuts. Love Asian flavors? Use bok choi, rice vinegar, wasabi, or a touch of sesame oil. Name ends in "i" or "o"? Grate in fennel bulb. Need a vacation in Hawaii? Add pineapple. Can't get enough bacon? Start crumbling.

Miracle Whip vs. Mayonnaise. The world can be divided in two parts: Miracle Whip or mayo, and never the twain shall meet. Some of my recipes call for mayo but you can use MW if you wish. Just beware, if you substitute MW for mayo, know that MW is sweeter and you should cut back on the sugar. If you need it you can add it later, but if you make it too sweet, there's no way to get rid of the sugar.

Weigh the head first. My slaws are based on the weight of the cabbage rather than a volume measurement, so weigh the head before cutting it up. A typical medium head is 2-3 pounds.

Serving. Because the dressing sinks to the bottom rapidly, when you serve slaw, use a big spoon and make sure you dig deep in the bowl to include lots of juice. For this reason, I like to eat it with a spoon, too.

Most slaws have cabbage as their base. How you cut it up is almost as controversial as the designated hitter. The way you cut the cabbage is crucial because cabbages are full of water, and the amount of surface area controls how much water the leaves will add to the dressing.

The bottom of the stem is usually gray and woody. Cut it off close to the head. Wash vigorously with cold water (no soap!) and shake off the water and pat dry. Discard two or three outer leaves if they are discolored. Cut off any other browned spots. Stand the head on its top so the stem end is facing up and slice the cabbage in half through the stem with a large sharp knife. Cut it in quarters by cutting through the core. Cut out the core with one angled cut. Some folks trash it. Arrrrggghh! I love it! It's crunchy, sweet, has carrot-like texture and juiciness. Cook's bonus.

Now you have to decide between three cuts:

Chopped a.k.a. country-style. This is hand cutting, my favorite method (shown above, and here). It produces an uneven slice that is larger and crunchier than the other methods and really lets the cabbage flavor come through. It also releases less water because there are fewer cut surfaces. Just lay the cabbage quarter face down on a cutting board and cut 1/8" slices, working from one end to the other. Then cut across the slices once or twice. Use the large holes of a box grater for the carrots. Besides. I hate cleaning the food processor after I make hash.

Grated a.k.a. shredded. This method produces confetti-like bits that are more uniform in size and texture. But a lot of moisture is given up when it sits, so the dressing will be runny. Use the large holes on a box grater. Watch yer knuckles.

Easy Side Salad for BBQ