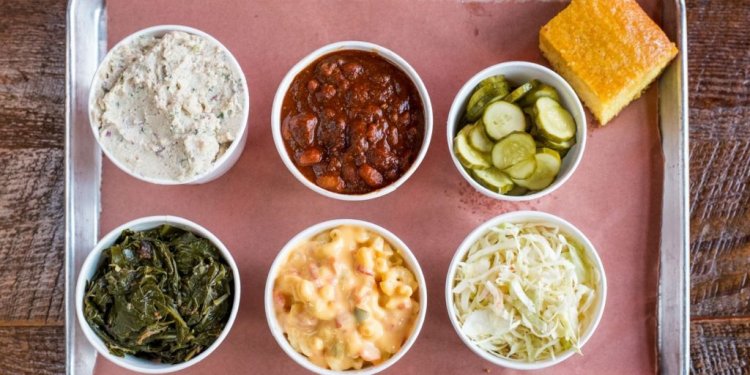 Like a Thanksgiving feast, any serious barbecue spread needs a few good sides. As a Barbecue Week special, here are 12 of the city's best barbecue side dishes. This list includes classics like coleslaw and cornbread, as well as a few non-traditional items, like a mac and cheese waffle and an "egg moat." If you have any favorite side dishes that are not mentioned on this map, please let us know in the comments.

Note: Restaurants are listed based on geography.

The sweet potato casserole at Mighty Quinn's could double as dessert — it's a real treat. Pitmaster Hugh Mangum serves the root vegetable with maple and pecans.

At this Gramercy favorite, Louisiana-born chef Jean-Paul Bourgeois is serving plenty of unique Southern dishes, including a breakfast sandwich during brunch that's made with a doughnut. One of the best side dishes is a basket of cornbread madeleines. They're baked fresh to order and served with syrup.

This light and bright salad is a good complement to Hill Country's brisket. It's made with thinly-sliced English cucumbers that are dressed with a mixture of shallots, sugar, sea salt, and rice vinegar.

Before the meat even starts cooking at your table, the rim of the grill is filled with whisked egg batter on one side, and mozzarella and corn on the other. The eggs cook slowly and bubble into a creamy, custard-like substance.

The cornbread at this Hell's Kitchen staple has a thick, golden brown crust on top. It's made with jalapeños, but the cornbread tastes more sweet than spicy.

All locations of Dinosaur Bar-B-Que serve these buttery, pleasantly salty spuds. As the name implies, this is a popular side dish in Syracuse, NY, where Dinosaur got its start.

Eater critic Robert Sietsema says that when he visits Texas-Oklahoma hybrid Mable's, the country-style black eyed peas are hard to pass up.

The team behind this Brooklyn barbecue pioneer adds pork and beef ends to the beans before slowly cooking them overnight. They're delicious, and Eater New York's news editor Serena Dai says she could have them as a standalone meal with bread.

Tyson Ho's Arrogant Swine serves a mac and cheese waffle alongside Carolina-style cue. This unusual carb creation is served with a cup of queso on the side.

This Prospect Heights barbecue joint makes a classic Texas-style red chili with beef. It's served with sour cream, cheese, and chives. Robert Sietsema is a fan.

This seasonal barbecue restaurant serves a tasty smoked jalapeño coleslaw with cilantro dressing. The side is good on its own, but it works even better atop a DIY pulled pork sandwich.

Ryan Sutton called the potato salad at Hometown Bar-B-Que a strong buy in his review of the restaurant last year. The salad is tangy and complex, and likened to a Russian Salat Olivier. Read Ryan's full review here.

BBQ ribs and side Dishes

Great side Dishes for BBQ