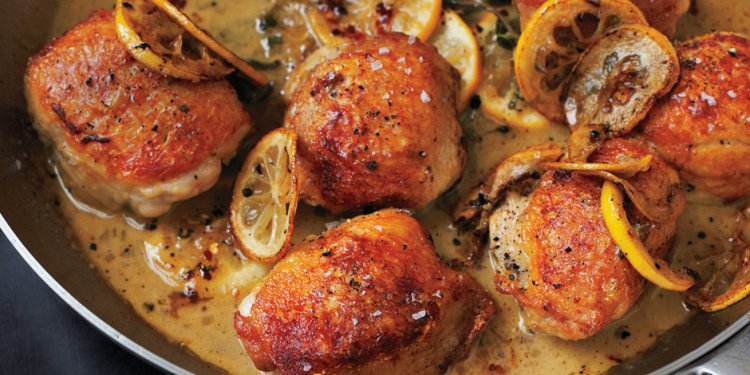 Grilled chicken appears on many Memorial Day cookout menus, but truthfully, I've never been much of a fan. One too many bland, dried-out chicken breasts has led me to focus my interest elsewhere. While grilled chicken frequently falls short of its potential, it does have plenty of potential: If you treat your bird right, you can look forward to grilled chicken that's moist and flavorful, with crispy skin and just the right amount of smoke. We've got 15 recipes—for wings, sausages, whole birds, and, yes, surprisingly juicy boneless, skinless chicken breasts—that will show you just how good properly grilled chicken can be.

If you're a longtime reader, you're well aware that we consider spatchcocking the best way to evenly cook whole poultry, and the technique works just as well on the grill as it does in the oven. For best results, use our two-step process: Start by cooking the bird through, skin side up, on the cooler side of a two-zone grill, then move it over to the hot side so the skin gets crisp and crackly.

While conventional grilling is fine for cooking small to medium-sized chickens, large roasting birds are better suited to barbecue. After 45 minutes, an eight-pound chicken will have reached the right internal temperature and had enough time to absorb plenty of smoky flavor from the wood chips. For this recipe, we use the exact same two-step cooking process described above—the only difference is the barbecue sauce we start brushing on toward the end.

Instead of putting wood in the fire, here we place a quartered chicken on wood planks, then set them on the grill grate. For juicy results, we both brine the meat and baste it with a mixture of olive oil, lemon juice, and tons of fresh herbs. The secret trick? Cutting slashes into the meat before it's brined, which provides deep channels for the baste to seep into.

The powerful marinade for Jamaican jerk chicken is simple to make at home with the key ingredients of allspice, thyme, and Scotch bonnet peppers (easily replaced with habaneros if they prove hard to find). The tougher part is in the cooking: Jerk chicken is traditionally smoked over pimento wood, which isn't exactly ubiquitous in American markets. Fortunately, you can get great results using bay leaves instead.

For a completely different yet delicious flavor profile, apply the heady Middle Eastern spice blend za'atar to grilled chicken. Made up primarily of sesame seeds, sumac, and a few common herbs, za'atar can be purchased in specialty markets, but this recipe will teach you how to make an even more flavorful version at home.

In Greece, chicken is typically sprinkled with lemon juice repeatedly as it grills, which, while imparting a wonderful flavor, doesn't do any favors for the meat. The moisture from the coating of juice will delay browning of the skin, meaning that the interior will overcook before the skin crisps. To get similar Mediterranean flavors with more juiciness, we skip the lemon during grilling, but use a lemon-heavy vinaigrette as both marinade and sauce.

I was treated to some of the best grilled chicken of my life just a few weeks ago on an island in the Gulf of Thailand. Thai grilled meat is generally excellent, but the chicken stands out—moist and flavorful, with a caramelized crust thanks to a marinade made with fish sauce and sugar. In place of the hard-to-find cilantro root that would go into a traditional marinade, we use thick cilantro stems.

For us, Peruvian grilled chicken is mainly an excuse to gobble up that addictive, spicy-yet-cooling creamy green sauce that's served on the side. Ours starts with a base of mayo and sour cream and gets flavor from jalapeños, cilantro, and aji amarillo pepper paste. The latter can be found in most Latin markets, but just omit it if you can't get your hands on any.

One of the most popular cuts of meat in America, boneless, skinless chicken breasts are certainly convenient, but they also tend to end up chewy-dry and lacking in flavor when grilled. If they're in your Memorial Day barbecue plans, keep in mind a few tips: First, pound the breasts to a uniform thickness for even cooking; second, brine them to help them retain moisture; and finally, monitor them carefully (and use an instant-read thermometer!) for doneness. We pull ours off at 150°F.

Why use Cornish game hens instead of normal-size birds? Easy: The smaller the chicken, the faster it cooks, and the lower the risk of drying out. That's especially useful with tandoori chicken, due to the high temperature at which it's cooked. A thick yogurt-based marinade, seasoned with paprika, cumin, turmeric, and other spices, helps keep the meat nice and moist. If you want the same red hue you'll find in restaurant tandoori chicken, you'll need to employ food coloring or achiote powder—contrary to what some say, that color doesn't come from cayenne pepper.

The fish sauce we use on these fiery wings, an interesting departure from the standard Buffalo variety, isn't there to add fishiness so much as extra savoriness, which is always welcome in our meaty dishes. It's added to an Asian-inspired marinade of Shaoxing wine, soy sauce, granulated garlic, and a ton of dried red chili peppers. Reverse-sear the wings on a two-zone grill, and they'll turn out good and juicy on the inside and crispy outside.

The key to getting extra-crispy skin on your grilled (or baked) chicken wings: Sprinkle them with baking powder and salt, then let them air-dry in the refrigerator. The elevated pH of baking powder improves the chicken's browning potential. That trick comes in handy with these wings, which we glaze with a pleasantly sweet-and-salty mixture of soy sauce, honey, and hoisin.

For these wings, we add a diverse seasoning mix to our baking powder coating— paprika, garlic powder, thyme, oregano, cayenne, and more—to provide that uniquely Cajun kick. After grilling the wings, we toss them in an intensely flavored Buffalo-inspired sauce made with butter, Louisiana-style hot sauce, and Worcestershire.

The sweet roasted garlic and tangy feta do most of the work in flavoring these sausages, made with juicy chicken thigh meat. Shallots, oregano, vinegar, and lemon juice also play a part, but we keep them light to avoid overwhelming the chicken. When it's time to cook, grill the sausages over medium-high direct heat until they hit 160°F inside.