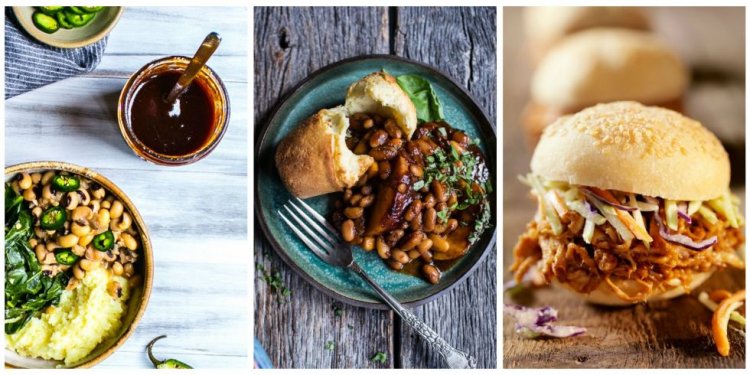 "If that's not a beautiful sight, I don't know what is, " crows Jim "Trim" Tabb as a gorgeous plume of hickory-fueled smoke leaves the chimney of his barbecue rig. It's just after breakfast, but Jim, an award-winning barbecue aficionado from Tryon, North Carolina, has already been at his smoker for more than six hours. His good friend, Garrett Oliver, author and brewmaster at Brooklyn Brewery in New York, couldn't agree more. The two men have been hosting barbecue and beer pairings at the brewery for nearly five years.

Today the buddies are in Columbia, South Carolina, preparing for a family reunion at the home of Bill and Madelaine Miller, Garrett's uncle and aunt. Jim's supplying the pork, Garrett is pairing beer with the menu, and Madelaine is kind enough to share a few of her favorite recipes.

BEER AND BARBECUE–PERFECT PARTNERS
Garrett guides you through the menu with a few of his favorite beers (all are available in large supermarkets). For more information on pairing beer with food, check out Garrett's award-winning book The Brewmaster's Table (HarperCollins, $16.95)–we review it in this article–or visit www.brooklynbrewery.com.

Garrett's mission is to empower readers with easy-to-understand information on beer, and allow them to bring what he considers "an under-appreciated beverage" to the stature it rightfully deserves on America's tables. The book takes readers on an informative tour of the world's most famous breweries and explores more than 50 distinct styles of beer from around the world. The end result is a book that is as easily enjoyed by the aficionado and the novice. "My feeling is that both wine and beer reach their best expression with food, but beer is by far the most versatile partner. That's because real beers have an incredible range of flavors–all of which, when appropriately matched, make for a perfect complement with food, " Garrett remarks. With the turn of each entertaining page, you, too, will agree.