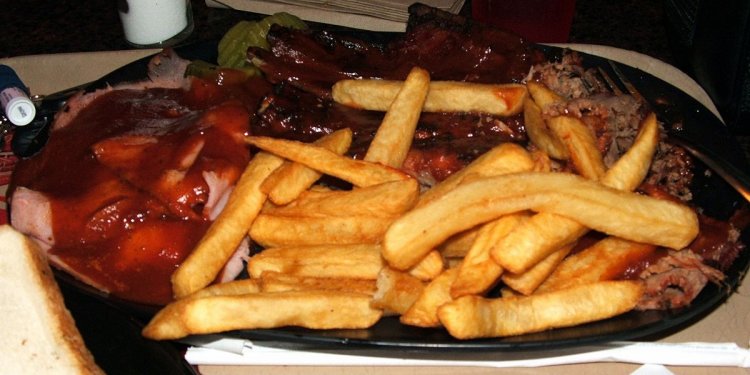 Arthur Bryant’s has lured in hungry customers since first opening, and despite skyrocketing to fame in 1972 when journalist Calvin Trillin called it “the single best restaurant in the world, ” the restaurant hasn’t strayed from its original recipe for success. It’s still a casual place where celebrities and regular folks alike line up to order at the lunch counter. A menu hangs over the counter that sits at the end of one of two simple dining rooms. Behind the counter, the main pit and work area sit within view of the customers. After orders are filled, diners find their way to tables where they find a trio of sauces in plastic squeeze bottles.

To the delight of crowds who are hooked on the packed brisket sandwich, burnt ends, and fries cooked in lard, the recipe for dry rubbed and slow smoked barbecue hasn’t changed, either. The only modern update is the addition of Boulevard beers to the legendary menu.

Russ Fiorella Sr. opened Smokestack Barbecue in 1957. His son Jack branched out with his own Smokestack in 1974. Today, the family tree boasts five Jack Stacks associated with the Fiorella name, plus a catering and shipping operation that mails fully prepared foods nationwide.

The Holmes Road property is the flagship and a great place to understand why the brand is so popular. It’s a multi-room, black-linen napkin, family-friendly restaurant that serves milk to the kids, beer and wine to adults, and well-loved barbecue to all.

The most popular items fluctuate between burnt ends and the fit-for-a-king prime beef rib that’s so big it could feed a family. Both specialties are smoked over hickory wood and served with one of three distinctive sauces. Pit beans, cooked in the same smoker as the meats, rank as the favorite side.

“Hi, may I help you?” the greeter shouts as diners walk in the door of a Gates Bar-B-Q restaurant.

The unexpected greeting startles newbies, but regulars just shout back an order, join a line, grab a tray, head to the counter to pick up their meal, and pay in Gates’s cafeteria-style system.

The Brooklyn Avenue location, the oldest in the chain, has one dining room in the shape of a trolley car that’s filled with wooden tables and booths where you seat yourself. The restaurant also sports a full bar, but only beer and soft drinks are sold in the cafeteria line.

To call LC’s casual is an overstatement for this hole-in-the-wall, grease-on-the-floor barbecue joint.

LC’s is a bare-bones, one-room place with about a dozen tables, a choice of basic beers, and counter service. A smoker sits behind the counter, and every time it opens, smoke lands on the tables, chairs, and customers’ clothing like a take-home souvenir. But what goes onto the plate makes up for the lack of dining refinement.